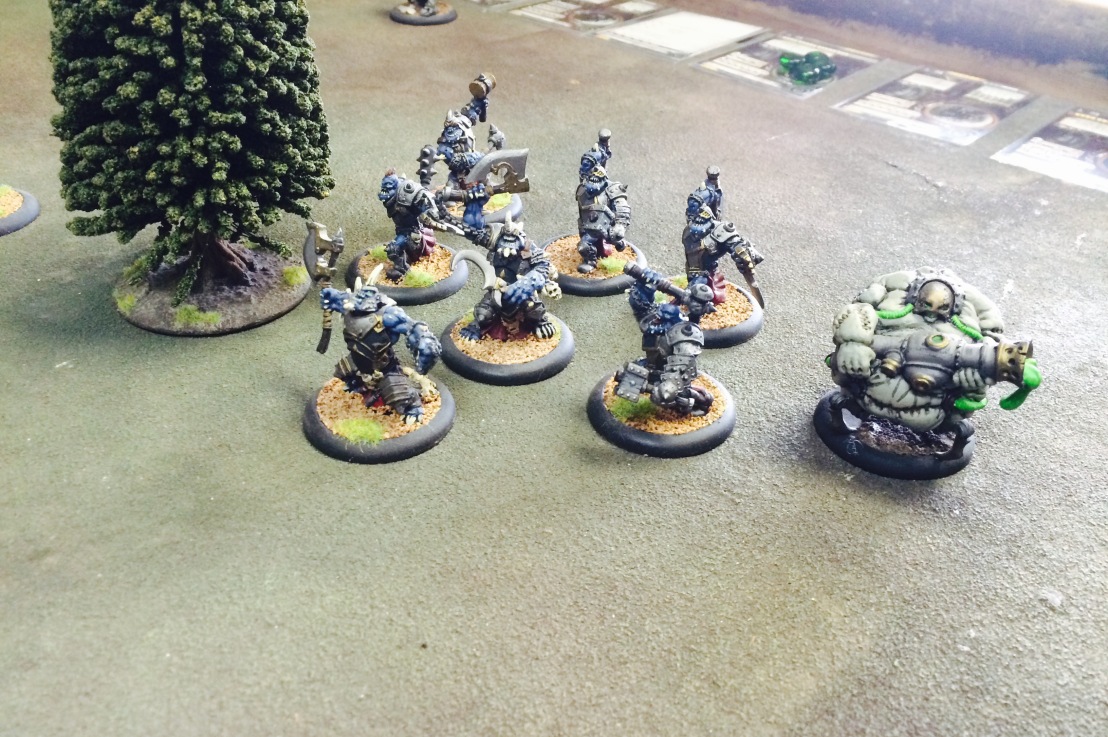 As I mentioned in my prior post, the collapse and demise of Warhammer Fantasy has prompted a lot of interest in Warmachine/Hordes across multiple gaming stores in my area. This past Sunday I stopped out at Phantom of the Attic to join some others in some good Privateer Press battles. Both games were on the smaller side at 25 points, and we used the three objectives scenario both times. First I faced Charles’ excellently painted Cryx, then Mike’s classic-look Khador army.

I was nervous about the game against Cryx, because Charles was fielding Lich Lord Venethrax–a model who is custom-made to give Hordes armies fits. His force had a lot of infantry for 25 points, from Bloodgorgers with their champion to a unit of Mechanithralls with three of their brute models. Two Helldivers, a crabjack, and the Bloat Thrall rounded out the force. For my part, I went with Lord Arbiter Hexeris and my usual complement of warbeasts: Bronzeback, Aradus Sentinel, Cyclops Brute, and the Razorworm (sexy Hexy’s bonded warbeast).

The match was tough but things swung my way with relative luck. The Bloodgorgers were the only living models on his side, but they were in a spot that made sense for my Aradus Sentinel to advance deploy closest to them–his Poison shot, plus Hexeris2’s Black Spot made short work of them. The Bronzeback also proved how massive Trainwreck plus Smash and Grab is, as he beat his way into the midst of the Mechanithralls and ended up killing one of their Brutes with the thrown crabjack. And Hexeris2’s channeled spells through the Razorworm proved to be the icing on the cake for stopping any Cryx threats that got too close.

With my side inflicting heavy losses on the Cryx forces, Venethrax had to get the job done himself. He rushed forward and easily cut down the Cyclops Brute, but it was too little and too late. Hexeris moved up and landed a fair amount of damage on Venethrax himself before he had his Aradus Sentinel charge in and finish the job. 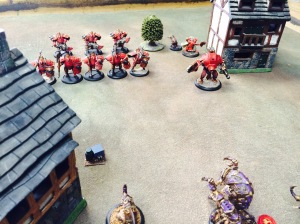 For game two of the day, Mike’s Khador force was a classic specimen: a wall of Man-O-War Shocktroopers, with a line of Man-O-War Bombardiers behind them, a massive Decimator Khador warjack, and the Butcher of Khardov with a War Dog. My force was the same as the prior game, but I was grouped somewhat differently due to a house that dominated the center of the battlefield. I saw that it would extraordinarily difficult to make a play for all three objectives, so I focused on getting the center and the right objective.

When Khador arrives, they hit hard, so I did my best to keep them at range so I could manage the first strike. The Aradus Sentinel and Hexeris2’s Black Spot again proved to be a central asset, as it blasted holes in the armored line of Man-O-Wars. Even their Shield Wall orders could not stop the Poison attack from wreaking havoc. Still, three wounded Man-O-Wars reached my Razorworm and the objective–however only one of them managed a hit on the defensive beast. I was able to clear the rest out with Hexeris2’s own melee attacks, having broken their Shield Wall thanks to the Razorworm eliminating the center model of the group. The Bronzeback and the Decimator went blow for blow, with the Bronzeback finally destroying the beast but left mostly crippled in the process.

I still had to be careful, as the Butcher can win a game solo if he starts too close to the opponent’s Warlock. I was able to be at just the right range to discourage charging, which allowed my Aradus Sentinel to get a shot in to damage him and the Cyclops Brute to use its speed and reach to connect a charge and finish off the deadly Khadorian foe.

Overall it was two good games against two foes. I’ve definitely gotten the knack for my Skorne force, as these were two very different styles of armies that I had to play different despite using the exact same force. That’s my general test for effectiveness with a force–being able to keep the same models and run them in varied fashion to cope with quite different threats. I’m looking forward to rematches against the armies of the Dead and the Cold.