So I’ve been toying around with the idea of running Rask without all the Lesser Warlocks, but still pretty beast-heavy. I’m working on getting Underchief Mire painted up, as I think he may bring a lot to Rask’s flexibility. Till then, I’m running what I think of as a 2×2 idea: two Swamp Horrors leading the way, backed up by two Wrastlers.

So far it’s working okay, if a bit slow. Rask actually takes more time to run than I expected, as there’s a lot of positioning concern in the early turns–making certain that the Feat ranges are complete protection isn’t always as easy as it seems.

I’ve really liked the one-two punch of two Swamp Horrors with Enliven and Admonition going in first, with two lingering Wrastlers waiting behind. Dahlia & Skarath is the one lesser I’m running now, and they’re designed to help swing whatever side I put them on, clear out infantry threats with sprays, and be a late-game assassination piece. It’s not an ideal list, as there are some things it can really struggle into, but it’s a fun list to play–and as I get the speed down on it I think it can leverage clock decently, as there are lots of decisions opponents need to be careful about when facing it.

Five of the six games I played recently were with variations of this Rask 2×2 list. First three were from a local steamroller, and then some practice games with opponents. 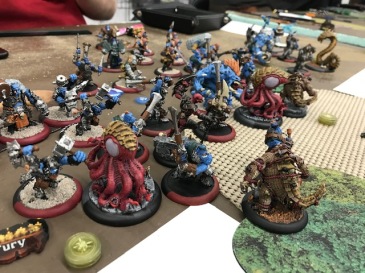 (Clockwise from Left) First round I got matched into Justin’s Irusk2 36 Doom Reavers list. I didn’t like either Rask or Maelok into this one particularly well. I probably should have worked armor and spacing with Maelok, but I opted for Rask as part of what I’m looking for in that list is infantry clearing. He wasn’t particularly effective at that, and I got far too pressed by scenario and ultimately lost the game on control points. Round two I faced Bill’s Madrak1 in Band of Heroes. Again, took Rask to leverage threat range and keep me safe from charges a turn. It worked better here, and I was able to open a corridor to Madrak1 and assassinate him. I almost bungled it a couple of times, but managed to get the job done. Third round was against Charles’ Gaspy3 list with Satyxis. This time I took Maelok, and that was an effective choice–Gaspy3 might run the few jacks in that list pretty scary, but does little to support the infantry. And they needed support to get thru the herd of gatormen. He had to get extrememly aggressive with Gaspy3, so Maelok himself was able to finish him off (with a Wrastler waiting in the wings as well if he came up short). All-in-all a fun tournament but hardly my best performance. Definitely need to get more practice with spacing and timing Rask’s attack. 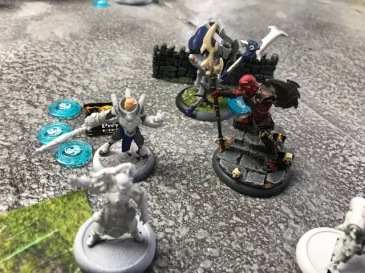 (Clockwise from Left) As for my practice games, I started with Rask into Makeda3, played by Larry. I got really close to assassinating her, which was good learning in what is a workable assassination run and what isn’t. Getting space for multiple heavies to stand is key, as I came up short because I could only fit the Snake into her after the Swamp Horror’s drag. Next I faced Steve’s Rahn list. Was another grindy game, this time with heavies trading into each other. I managed to win on scenario thanks to early presence and the way that Rask’s feat slows opponents’ ability to get to the rear scoring zones without sacrificing models. Final game was against Andy’s Irsuk2 running Iron Fangs. Andy put Irusk2 pretty close, and we paused the game to work out an assassination run with proxy bases where a Swamp Horror supported by a Wrastler both got onto the warcaster. It was pretty likely, but we were interested in a more extended game so we played it out. I ended up winning on scenario, but to be fair Swamp Horrors match up super-well into Iron Fangs so it was a tough slog from list selection for him. I’m definitely looking forward to the rematch on this one someday.

Finally, I got a ton of painting done. I decided to swap the order on my painting progress, as I’m endeavoring to write more thoughtful articles about the lists I’m running–and putting that first. But I don’t want to neglect the painting progress, so here we go.

Rask turned out really nice, I think. I love painting reds (no surprise), and it was fun to do some of the various highlights on him I definitely think my look for the Bog Trogs is my favorite (above Gatormen and Croaks). 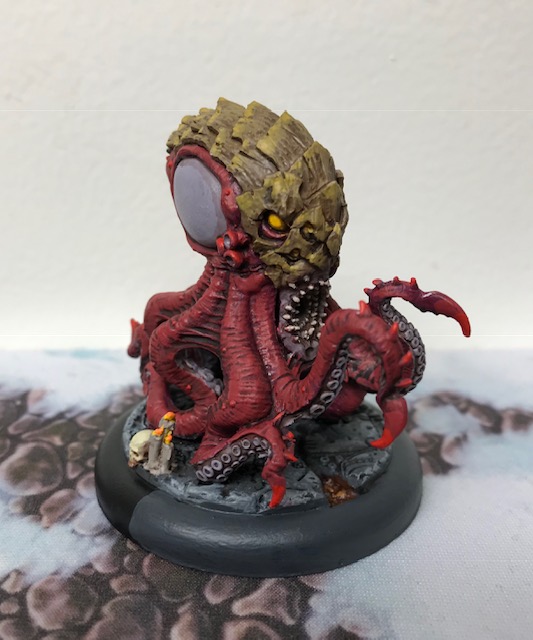 Both Swamp Horrors to go in my 2×2 list idea. These were also fun to paint, and pretty easy overall. They used techniques from the Gatormen but also from the Bog Trogs, so were nicely a middle ground model in that sense. 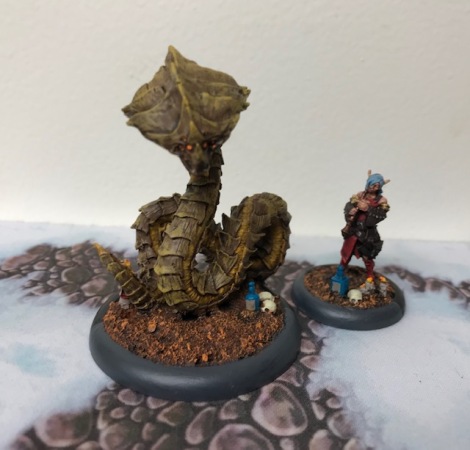 Dahlia and Skarath were more of  challenge, and the picture doesn’t quite do them justice here. I liked the yellow snake motif I’ve done on things like the Sacral Vault (and will be on Jaga-Jaga), so finding how to fit that onto Skarath was a challenge. I went for the flesh between the front and back armor plates, and think it worked out nicely. They fit the rest of the army but still definitely stand out. 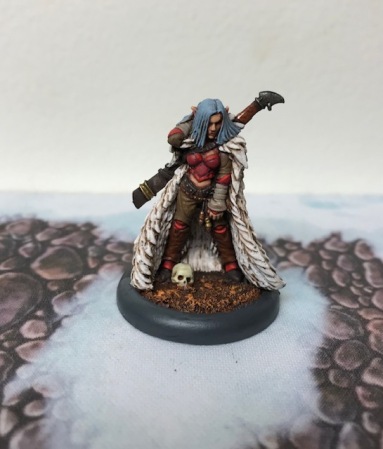 Lanyssa Ryssyl, Nyss Sorceress, is probably the model I’m most proud of in this set. I really like the look of how she turned out, and I’m happy with her face and some of the lines of her more than anything else. A lot of the things I struggle with are on this model, so I felt definite accomplishment in getting her not only done, but looking pretty good.

Finally good, old Targ. He took far longer than he would seem to, as he’s got patchwork skin all sewn together on his arms and also composing his apron. I’m pleased how he came out, and I really liked making his red armored accent his eyepatch (he also has little bracers on his hooves and a bar across his back that are red, that you cannot see in this image). He’s ready to help out with my next project list… that’s right, some Farrow are coming soon.