Another cycle in our campaign of the Warhammer 40k Urban Conquest game has been completed. My joint Nurgle force of Daemons and Gellerpox Infected again took the battlefield against the Imperium.

In preparation I painted up three new Beasts of Nurgle, using sculpts from Kromlech miniatures. The snail-shell aesthetic matches Hortiuculus Slimux, and they’re a good variant for the list. 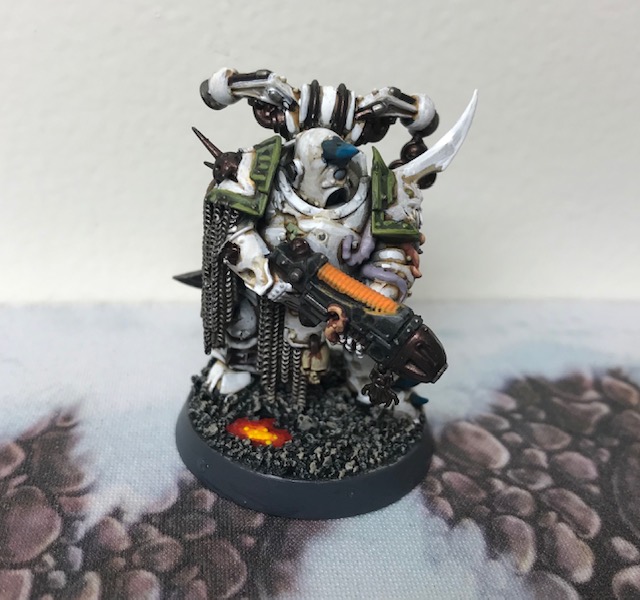 I also finished up my first test Death Guard Plague Marine, as I’m going to be expanding from Daemons to that force as I go. Figured the test paint job was worth sharing as well. He’s not perfect, but I think I’ll get better with the techniques as I practice more of the armor.

The game we set up was a mission from the Urban Conquest book, and my opponent was again Ryan’s Astra Militarum. His mission was to get to various buildings in my half of the board, and use a free strategem to detonate the building and destroy it. There was a bit of a hide and seek element to it, as one building was secretly denoted as my headquarters–and victory hinged on my protecting it.

A Beast of Nurgle reaches Ryan’s tank line. He chose to sit and fire, which increased his shot effectiveness but left him very little to seek out the objectives in buildings. Being able to deploy up to the midway point of the board, plus Slimux’s boost to let beasts re-roll their charge distance when they were close to him, let me flood his side of the board rather quickly and bog down his offensive.

This tank was the one that made the most progress, getting close to one of my buildings (that line in the terrain is the center line, and the edge of the building is just visible in the lower right). It wasn’t my key command building, but it was progress. Ryan’s armored sentinel was the only thing that managed to detonate any buildings, but they were not the correct ones and I managed to carry the day with the aggressive daemon stall. A triumph for the pestilent one, though my beasts took a real beating–I lost four of the six–and almost my entire Gellerpox were wiped out besides their leader and a CP-summoned new unit of flies.

After round two of the campaign, my points lead increased again (I’m the green skull). While I don’t get as many resource points as the other factions, investing in campaign-point sources from the start so far is paying off. I know that opponents can equalize quickly–so I’ve got to keep being successful. And lucky–Ryan took the resource item that gave him an immediate d6 campaign points, only to roll a 1. He could have closed the gap to only 3 points with a different roll!

I’m aiming to play against the Xenos side and attack some Eldar in the next round, but also want to get a game in against the Imperials again to try and capture one of their critical sectors of the campaign map–as I used my resources to buy the strongpoint assault benefit to let me try it.

Before next time, I hope to make considerably more progress on painting Nurgle Daemons–getting 20 Plaguebearers and a unit of Nurglings done to start to flesh out my forces with troops. I’m too elite-heavy right now and it shows. More fiddling with Death Guard models is likely to happen as well. And there are bigger projects on the horizon, that coincide with the Chaos Knights codex just being released. More disease to come!

Death Guard: 9 (I decided that model is going to be a Death Guard daemon prince rather than Nurgle daemons daemon prince as the list grows–I’ll eventually do up a suitably daemonic Daemon Price as well)

So the few followers of this blog may have noted that my painting and playing of Warmachine and Hordes has slowed to a glacial pace. The good news is that a new set of painting, and now finally playing, endeavors have filled the void. I’ve been working very hard on a Nurgle combined force, spanning Daemons, Death Guard, and even Gellerpox Infected. I’m really enjoying moving back to modeling and painting Games Workshop miniatures–working with their plastic kits and the level of detail and nuance they provide for painting is just great.

I’m really pleased with how the big guys turned out, both Vulgrar Thrice-Cursed and the large mutants. These were a good start to my experimenting with Nurgle, as I’m wanting to use a limited color palate for the skin, tentacles, boils, and pustules, and a rotation of flesh tone, Nurgle flesh, and a pale lavender seem to be perfect.

The other half of the Gellerpox: all the bugs and bits. I’m liking the blue tone for scales and for wings, and think it gives some good balance to the models. Clearly I’m doing lava bases again, as I really like the effect and it ties together armies nicely. 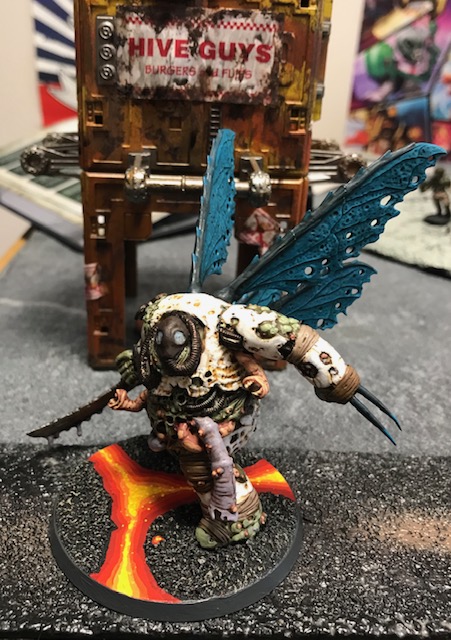 Horticulus Slimux, a cluster of Beasts of Nurgle, three Feculent Gnarlmaws, and a Daemon Prince (right now he’s running with the Daemons, but can be Death Guard as I grow my forces).

To get some games played, I’m joining a group of friends and participating in the Urban Conquest campaign rules. The groups are divided into Imperial, Chaos, and Xenos, with Imperial being the most diverse set of armies and players, me carrying the Chaos banner with our Slaanesh player, and the Xenos being a solitary Eldar player (well, Craftworlds/Aelderi these days).

Our first night of games saw my force, led by Vulgrar Thrice-Cursed, get trapped between an Astra Militarum (Imperial Guard) Cadian army. The mission required me to get a certain number of my units out of the ambush and off the far table edge. Nurgle may be slow, but my resilience and diversity of units really helped me get enough to safety. The only trace that Nurgle’s minions had been present were a few cultists’ singed robes, some dead flies and fleas, and a row of feculent gnarlmaws planted by the Grand Cultivator himself. A win for Nurgle’s forces! 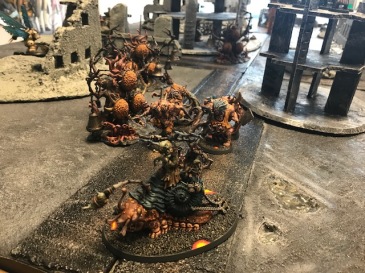 Some shots from the game. A mutant stops for a snack. The Astra Militarum tanks fend off the tiny flying swarms. And Horticulus Slimux manages to shepherd off enough models to win the game.

The urban conquest campaign rules are a pretty neat kit. Games Workshop continues to get more and more effective in their campaign structures. This one is great because it really focuses you in on the games–play them, and have fun, and get missions based upon your sort of grand intentions as a force each round (e.g. “we’re on the attack,” “we’re staying defensive,” “we’re scouting,” or “we’re reinforcing”). The sticker sets are more like window clings, so they let you reuse the cards perfectly. I ended up aiming at victory points over resources, which I’m regretting after the first round of the campaign phase. A bit more balance may have been more flexible. In any case, I’m looking forward to more games and more fun with these models and this story. 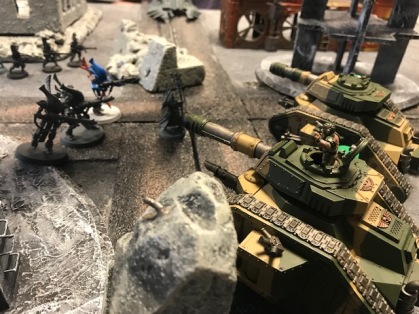 The other game of the evening saw the Astra Militarum going up against the Eldar. The Guard just narrowly edged them out for a win. The campaign system uses a set of cards to represent the city in which the conflict is happening–the skulls in the lower left indicate when they’re owned by a faction. Mine are hard to see–green for Nurgle!