This event is a Kill Team-based narrative event for 1-12 players, run exclusively for  Drawbridge Games’ “Extra Life” 24 hours of gaming marathon fundraiser. Players take the role of a single trooper, and fight their way through massed opposition to escape from a dangerous space hulk. Expected play time is 3 hours, and the event starts at 8:30am to kick off Extra Life!

Players can pick any of the characters off the following list. The requirement is that players bring one single painted Warhammer 40k miniature that correctly represents the model that they are fielding. Players will do equipping of the model during the game, so any wargear depicted on the model is fine for the event. Players should also bring dice of their own, any tokens, and a measuring tool for the game.

Nothing else is needed to prep for the event, other than having the rules handy for your model and reflecting on this opening to the event’s story:

The last thing you remember is the war against the Orks. They were retreating from your force, and then it happened. You rounded a corner, and saw a strange Ork in a mechanized metal frame. The Ork had a strange device hanging over its shoulder, and the final thing you saw was a strange blue light burst from the device and fill your entire field of vision. 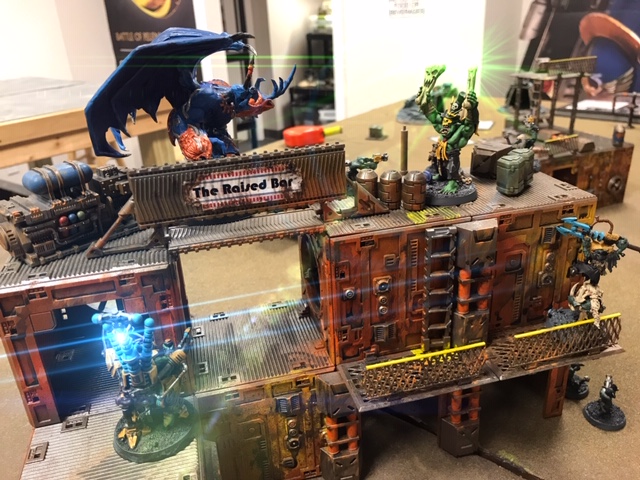 This is a 40k story battle report featuring my Bad Moons Ork army versus Andy’s Tzeentch Daemons force. We’re gearing up for a big event, and Andy’s been painting up a storm, so we wanted to get some models on the table for a scrum.

Skizzit had never been a lucky git. Skizzit worked hard on his Warboss’ trukk, mostly repairin’ the whatnots and makin’ sure that the yellow paint was fresh. Skizzit’s Warboss was a Bad Moon, and that meant an eye for style and sumthin’ he called “sofikstikation”–which Skizzit understood mostly as lots of fresh yellow paint.

The Orks in Skizzit’s warband had been muckin’ around some ancient ruins, lookin’ for good loot amid the vacated humie structures that had been built. All Skizzit knew was that the humies had been here, and built some stuff to explore the ruins, but the humes weren’t around when the Orks arrived. It wasn’t long until one of the more knowy mekboyz got to turnin’ on some of the equipment the humies left, and then the fightin’ began.

Skizzit didn’t understand the things that came pouring out of the central chamber of the ruin, up into the abandoned work zone. They were fleshy odd things, in pinks and blues, with all sorts of flames everywhere. The Orks dove into battle with the things, but the fires were hot and when the Orks krumped ’em, they just came back with more.

The biggest of the squishy things was more massive than a Warboss, and had big old wings that carried him from fight to fight. Da Warboss got both his Big Mek and his Weirdboy to lead the attack on the thing, tho it was hard for Skizzit to tell if the thing was damaged at all by their attacks–as he barely understood what the Mek and Weirdboy did themselves. He did know that as the big thing killed its way through all the Orks and his fellow grots, things were getting out of control. What’s worse, is that Skizzit fled to the top of a building, only to find the big winged thing landing up there with him. He was trapped between the unsettling Weirdboy (who he always tried to avoid) and the great winged thing itself! The creature roared a massive roar as it sought to get at the Weirdboy, whose own eyes were glowing green with power. Skizzit fumbled in his bag for the small slugga he had nicked, vainly hoping to protect himself. The great bluish creature rushed forward, reality itself warping where his clawed feet treaded. 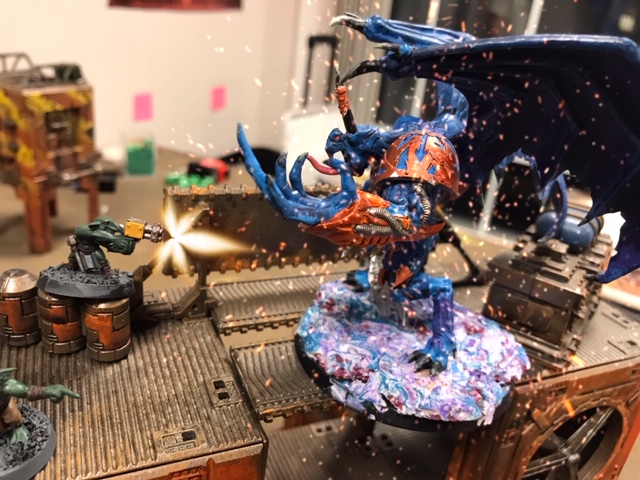 Skizzit raised his slugga and fired vainly, hoping that the noise would at least cause the thing to slow down or move away or something. Somehow, some way, the round from his slugga managed to catch the creature in the thigh. A hole appeared there, blistering with fire, and as Skizzit stood watching the air around the creature burst with sparks. The flaming hole in the thing’s thigh expanded and expanded, and after but a moment it was consumed in strange energy and reduced to ashes.

That was when Skizzit was taken from the Warboss’ Trukk work crew, and became part of the Weirdboy’s personal detail. He had defended the strange Ork once, and the whole crew said he’d have to keep doing it again. He was the blue giant killer, after all.

That’s how Skizzit found himself huddled in the shadows of the Weirdboy’s hut, suffering strange dreams and the Weirdboy’s frightening ranting every day, reflecting on how he never had been a lucky git.