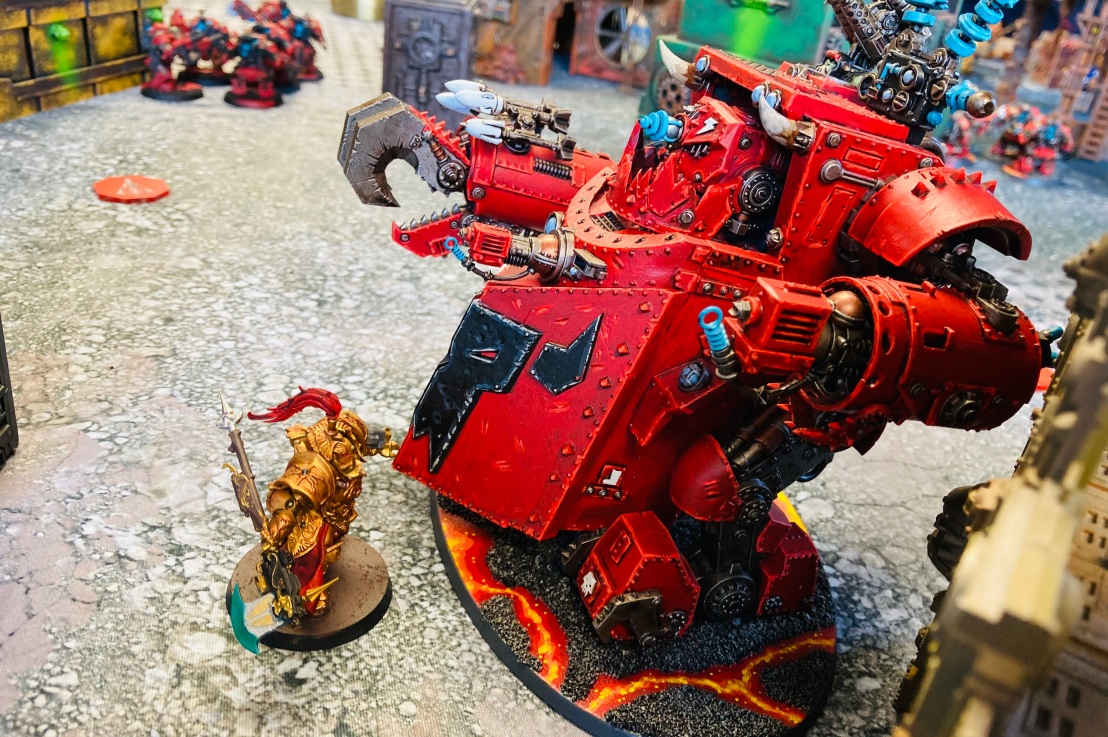 Got a chance to play a new player at my local game store, Alex, and his Custodes. Not a Crusade or Campaign game but just for fun. Here’s the write up. Mission was a Nachmund mission: Display of Spiritual Might. My secondaries were Assassinate (he had lots of characters), Domination (I had numbers so thought I might get lucky, and this was definitely a “one has three, one has one” sort of mission), and Stomp ‘Em Good (kinda tough given Custodes were elite, but thought maybe I could pull it off… spoiler alert, I didn’t hah).

It was dawn on the planet, a manufacturing world in the fringe of the Segmentum Solar just past the Cicatrix Maledictum. It had been 8,000 years since Orks ravaged the planet as a part of the War of the Beast in M.32, and yet now they were back. The Cicatrix played havoc on Imperial warp travel, so it well might be even worse on the incautious Orks. Whatever the reason, they had arrived, and the landers had been pouring down from the Space Hulk and pair of Kill Kroozers since they appeared in the system. In the early dawn light, the shadows of the force–particularly a massive Morkanaut–cast long ahead as they fought their way though the shanty town.

While the Custodes were charged with defense of Holy Terra, there was a contingent of them that had been pursuing off-world aims as part of a broader defense (they’d crossed paths with some Genecults that linked back to Terra). As such, they were closest to respond. The contingent, more formal and leadership-heavy than would be ordinary, assembled as close as their lander could get them to the Ork front lines.

The Captain on the Jetbike roared ahead of the main force–which were all on foot–to scout out the battlefield and engage with the Orks as soon as he could. Unfortunately he ran right into the towering Morkanaut. The blistering hail of weapons fire from the towering beast formed such a curtain of electrical discharge, the bike’s propulsion systems caught and sputtered. The metallic beast’s crushing claws managed to swipe the bike once, and with the damage it was all the Captain could do to retreat and get himself and the precious artifact bike back to safety and a Tech adept.

The other Custodes leadership group came in two waves, Trajann and a Blade Champion with the main line, with two Shield Captains in Terminator armor using short-range teleportation strikes to join the attack alongside a group of Allarus Custodians. The Orks had some sort of battlewagon with a massive drill that moved through the earth, followed by waves of Mega-armored Nobz. Trajann stood valiantly against them, but the huge battlewagon proved to be just too sturdy (or too ramshackle) to take down easily. He found himself beset by Meganobz while trying to down the clanking behemoth of a vehicle. The Blade Champion lept into the fray, killing swathes of the heavily armored Nobz himself, but the waves were just too many. Even a single slip in coordination and the massive saws or pincers of the Ork suits could damage. With the battlewagon continuing to grind down their line of troops, they had to cede the point and make a fighting retreat. This was not Holy Terra itself, and thus tactical discretion when damage started to pile up was the order Trajann enforced. He didn’t want to lose a single brother to the odd happenstance of an Ork attack while they were responding to a different matter.

One valiant brother had fallen in the main line, while the rest had retreated in the face of considerable damage. Given a chance, the brothers could cut through the Orks’ armor easily–but the sheer numbers advantage of the Orks, plus the fire of their combi-rokkits and skorchas took a toll in terms of damage. Numerous brothers took enough damage to need to pull back to safety.

One lone Shield Captain in Terminator Armor stood firm, refusing to cede the ground while the enemy still stood. Whether he had a link to the planet, a streak of stubbornness, or a vow against the Orks it didn’t matter: he stood toe-to-toe with the massive Morkanaut and resolved to take down the giant monstrosity before he left the field.

Seconds bled into minutes as the titanic clash continued. All the other Custodes had left the field, calling to their companion over vox that he should come with them, that this was a moment for discretion. The remaining Meganobz were turning around, consolidating objectives on the battlefield, and starting to look in his direction. The Morkanaut’s attacks were being stopped by careful parries alongside the raw power of his armor’s protective field generator, but even his near-eternal strength and training started to waver. Blow after blow came closer to hurting him, and the occasional weapons shot (as the thing blazed away with all guns as well) managed to wound him. His strikes were damaging the thing, limiting its own attacks more and more. But still, it wasn’t enough. The massive claw swung and he was a little too slow, and it seized his leg. With a surprisingly quiet “snip” the leg came off entirely, and the Shield Captain fell to the ground. The mighty machine started swinging again and again down onto him, pulverizing his form further and further–the smoke and steam from the rents where his weapon had scored the metal frame of the Ork machine seeming like boiling anger at this foe.

Pict caps of the fight–gathered by data-servo skulls–were relayed to Trajann’s display. He watched his brother, veteran of a thousand fights, battle valiantly but fall to the Morkanaut. His blood boiled. The Orks needed to be stopped. This was not Terra, but it was the Segmentum Solar. This was the domain of Man, not of Orks. He vowed they would return this fight to the Orks tenfold, and that the fallen Shield Captain’s sacrifice and fervor would not be forgotten. He appended the data file to auxillary artisans, to have a new vambrace made for the Shield Captain that would replace the fallen one–to honor his legacy.

Finished up three Meganobz (from a set of 12 total new ones to add to my “Deffwing” force). Super-fun to complete them as always.